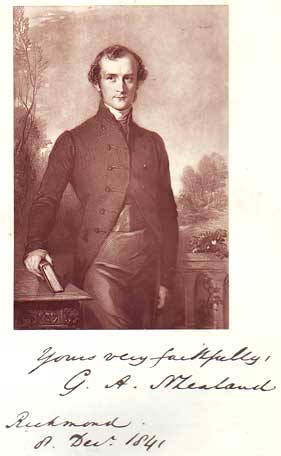 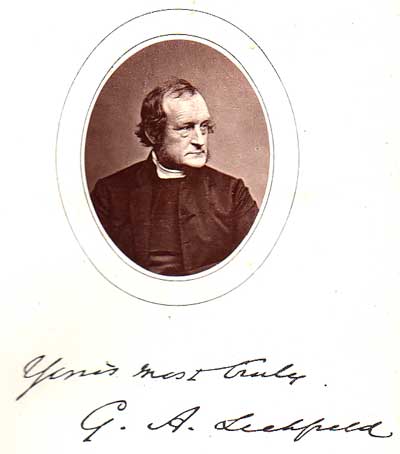 A Sermon, Preached in the Chapel of Lambeth Palace, at the Consecration of the Lord Bishop of New Zealand, on Sunday, October 17, 1841.
By William Hart Coleridge.
London: J. G. & F. Rivington, 1841.

Journal of a Walk with the Bishop of New Zealand, from Auckland to Taranaki in August 1855.
By Charles John Abraham, Archdeacon of Waitemata.
London: Printed for the Society for the Propagation of the Gospel, and sold by the Society for Promoting Christian Knowledge, 1856.

The Island Mission: Being a History of the Melanesian Mission from Its Commencement
Reprinted from "Mission Life."
London: William Macintosh, 1869.

In Memoriam. A Sketch of the Life of the Right Reverend George Augustus Selwyn, Late Bishop of Lichfield, and Formerly Bishop and Metropolitan of New Zealand.
By Mrs. G. Herbert Curteis
London: J. Parker and Co., and Newcastle: G. Hickson, 1878.

Bishop Selwyn of New Zealand and Lichfield, A Sketch of his Life and Work.
By George Herbert Curteis.
London: Kegan, Paul, Trench and Co., 1889.[External link]

Notes of a Speech, by the Right Rev. George Augustus, Lord Bishop of New Zealand, at a meeting of the Windsor and Eton Church Union, All Saints Day, 1841.
London: Richard Clay, 1841.

How Shall We Sing the Lord's Song in a Strange Land? A Sermon, Preached in the Cathedral Church of St. Peter, Exeter, on Sunday, December 12, 1841, Previous to His Departure from England.
Exeter: P.A. Hannaford, 1842.
London: Longmans, Rivingtons, and Hatchards, 1842.

Thanksgiving Sermon preached by the Bishop of New Zealand on His Arrival in His Diocese.
Paihia: Church Mission Press, 1842.

Letters from the Bishop of New Zealand to the Society for the Propagation of the Gospel, with Other Information concerning His Diocese.
London: Rivingtons, 1843.

Annals of the Diocese of New Zealand.
London: Society for Promoting Christian Knowledge, 1847.

Church in the Colonies, No. VII. New Zealand, Part II.
Journal of the Visitation Tour, from August to December, 1843
To which is Prefixed an Extract of a Letter from the Bishop to a Friend in England.
London: The Society for the Propagation of the Gospel, 1847.

Church in the Colonies, No. VIII. New Zealand, Part III.
Journal of the Visitation Tour, from December 1843, to March 1844,
Including an Account of His Visit to the Southern Island.
London: The Society for the Propagation of the Gospel, 1846.

An Idea of a Colonial College: A Sermon Preached in the Chapel of St. John the Divine, Bishops Auckland, by George Augustus New Zealand, on the Fifteenth Sunday after Trinity, 1847.
Eton: no publisher, 1848.

A Charge, Delivered to the Clergy of the Diocese of New Zealand September 23, 1847.
London: Francis and John Rivington, 1849.

True Use of Warnings: A Sermon Preached after the Earthquake at Wellington in November 1848.
Auckland: St. John's College, 1849.

Church in the Colonies, No. XX. New Zealand, Part V.
A Journal of the Bishop's Visitation Tour through His Diocese, Including a Visit to the Chatham Islands, in the Year 1848.
London: The Society for the Propagation of the Gospel, 1851.

"A Little One Shall Become a Thousand:" A Sermon preached at the Opening of the Cuddesdon Theological Institution, on Thursday, June 15, 1854.
Oxford: J. Vincent, 1854.

"Bartholomew:" A Sermon Preached at the Anniversary Meeting of the Two Societies for Promoting Christian Knowledge and the Propagation of the Gospel in the Cathedral Church of Salisbury, August 29th, 1854.
Salisbury: Brown and Co., 1854. [External link]

The Work of Christ in the World: Four Sermons Preached before the University of Cambridge on the Four Sundays Preceding Advent in the Year of Our Lord 1854.
Cambridge: Macmillan, 1855.

A Verbal Analysis of the Holy Bible: Intended to Facilitate the Translation of the Holy Scriptures into Foreign Languages.
Compiled by the Bishop of New Zealand and printed for the use of the Melanesian Mission.
Cambridge: Macmillan, 1855.

A Sermon Preached in Aid of the Funds of the Church Society for the Diocese of Sydney.
Sydney: F. M. Stokes, 1856.

Norfolk Island: Correspondence between His Excellency Sir W. Denison, K.C.B., Governor General of Australia and the Bishop of New Zealand.
With other documents relating to Norfolk Island, and its present inhabitants.
Bishop's Auckland: St. John's College, 1857.

Address of the Bishop of New Zealand Delivered at the Opening of the First Meeting of the General Synod of the Church of England, Wednesday March 9, 1859.
Wellington: Printed at the Spectator Office, 1859.

Bishop Selwyn's Address at the First General Synod of New Zealand.
From The Church Journal, August 10, 1859.

Isles of the Pacific: Account of the Melanesian Mission and of the Wreck of the Mission Vessel, also the Bishop of New Zealand's Sermon on the Consecration of the Rev. J.C. Patteson, M.A., in St. Paul's Church, Auckland, N.Z., with a Letter from the Missionary Bishop.
Melbourne: Samuel Mullen, 1861.

Sermon Preached at the Consecration of the Rev. John Coleridge Patteson, M.A. Fellow of Merton College, to Act as Missionary Bishop among the Western Islands of the South Pacific, on the Festival of St. Matthias, Feb. 24, 1861.
Auckland: Printed at the Melanesian Press, 1861.

Jubilee Address to the Missionary Society of the Protestant Episcopal Church in the United States of America, Baltimore, Maryland, October 6, 1871.
Extracted from The Churchman, New York, Daily Edition, Monday, Oct. 9, 1871.

"Concluding Address" at the meeting of the Board of Missions of the Protestant Episcopal Church of the United States of America, meeting at the Academy of Music, New York, on October 13, 1874.
From The Church Journal, New York, October 22, 1874.