Project Canterbury
The Visit of the Archbishop of Canterbury to the Cathedral of All Saints, Albany, New York
September 23, 1946
Transcribed by the Very Reverend Gary W. Kriss, 2006

CATHEDRAL NEWS
NOVEMBER, 1946 - THE CATHEDRAL OF ALL SAINTS ­ ALBANY, N.Y.

One of the great events in the history of the Cathedral occurred Monday evening, September 23rd., when the Most Reverend and Right Honorable Geoffrey Francis Fisher, D. D., Archbishop of Canterbury and Primate of All England, was the preacher at a service of Choral Evensong.

Archbishop Fisher had been in this country as a guest at the General Convention of the Church in Philadelphia. His visit to Albany was the last public appearance in the strenuous schedule that had been arranged for him. Bishop Oldham, who had been the guest of the Archbishop at Lambeth Palace this summer, had invited His Grace to visit Albany. State, city, and diocesan representatives combined to receive properly the Archbishop and Mrs. Fisher, and to extend a warm welcome.

The high point of the Archbishop's visit was the public service. A congregation, probably the largest ever to assemble in the Cathedral, filled every seat; and hundreds stood through the service. At least half of the diocesan clergy were vested Churchpeople from every part of the diocese had come to Albany for the occasion, and a truly representative congregation heard the Archbishop's address, which was a strong plea for Anglo-American unity, and for a renewed appreciation of the world-wide Anglican Communion.

The Cathedral was a worthy scene for this important occasion. It has its own links with Canterbury Cathedral. Preserved in the Cathedral of All Saints is a stone from Bell Harry, one of the great towers at Canterbury. The pastoral staff at the throne of the Bishop of Albany is fashioned from a beam that supported the roof of the ancient refectory there. It was fitting that the offering at this service is to go to the fund being raised for the preservation and repair of Canterbury Cathedral as a thank-offering for its almost miraculous escape from damage during the war. 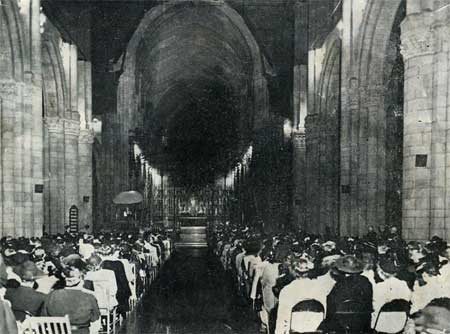 This is the second issue this year of the Cathedral News, which informs our friends of our activities and progress. We expect from now on to retain this printed form, and as printing restrictions ease, to make it larger and more informative.

The Cathedral continues its function as the spiritual center of the diocese. Each day Morning and Evening Prayer are read, adding the contribution of the Diocese of Albany to the stream of praise throughout the world. The Holy Communion is celebrated at least once daily. At this service we include in our earnest intercession the manifold interests of the Church at large, and the diocese. Through October 12 this year there have been 101 Sunday and 278 weekday celebrations.

The hospital chaplain, working from the Cathedral, has brought the friendship and the sacramental ministry of the Church to the sick, with 1385 hospital calls this year.

The first actual step since 1904 toward the completion of the Cathedral has been taken. As memorials, to be announced more fully later, two fine stained glass windows for the north transept clerestory are being made by the Connick Associates of Boston.

This fall we plan, as general activities, services of Choral Evensong with visiting preachers on the Sundays in November at 4 o'clock. A School of Religion will be held on the Tuesdays in Advent.

The Friends of the Cathedral now number 500, a new member being the Archbishop of the West Indies, one of the many visitors to the Cathedral this summer.

The Cathedral offering to be taken throughout the diocese will be used this year to make further repairs to the fabric, and to help us in adding another member to the clerical staff, so we may meet more fully the many demands for pastoral service.